Conversations With Colonel Corso: A Personal Memoir and Photo Album (2017)

Conversations with Colonel Corso draws on Paola Harris’s personal memoirs of the Colonel including private conversations, formal interviews, and public appearances. Laced with personal anecdotes, urgent messages, and including more than 80 photos and historical documents, this book is a must-read for anyone interested in the history of UFO disclosure and the significant contributions of this important US military whistleblower. 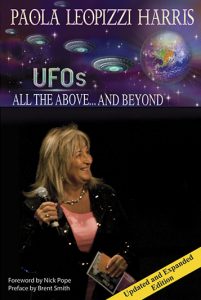 This is an excellent edition for students of Expolitics and anyone who is interested in the future of the human race. With historical interviews that include Steven Bassett, Dr. Michael Salla, Richard Hoagland, Grant Cameron, Larry Warren, Kathleen Marden, Jim Sparks, J.J. Hurtak, Clifford Stone, and Italian contactee Maurizio Cavallo plus NEW interviews and exposition by Paola Harris, this book brings together new evidence and current theories about alien contact and where the human race is headed.

UFOs: How Does One Speak to A Ball of Light?
New Revised Edition (2012) 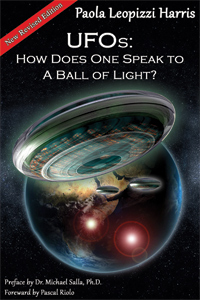 This NEW REVISED VERSION of the UFO classic contains new interviews with top experts in the field on subjects like Stargates, Orbs, Time-Travel, and Hybridization. New material includes an interview with Steve Allen, key witness to the Stephenville Lights sighting; the debut interview of Kim Arnold, daughter of Ken Arnold, discussing her father’s legacy and the impact his sightings had on the Arnold family; an excerpt from Clifford Stone’s book “Eyes Only”; and more. Plus, Dr. John Mack’s last lecture in Italy “Our Future Transformation to a New World View!”

Exopolitics: Stargate To A New Reality (2011)

Essays and Interviews with Experts in the Field Of UFOs and Related Phenomena Vol. II

“Only a premier investigative journalist as Paola Harris, who has had unmatched access to the ‘Who’s Who’ of the international world of the paranormal, can so clearly explain the varied concepts of the puzzle of ‘life’ as she does so well in Exopolitics: Stargate to a New Reality.” –Yvonne Smith, C. Ht. Director: Close Encounters Resource Organization [CERO] Author: CHOSEN: Recollections of UFO Abductions Through Hypnotherapy

This book is dedicated to Coast to Coast host George Noory because he has inspired the responses in this book: All of The Above. Filled with important information, this book will stimulate the mind. It includes essays from the top researchers all over the world as to the possible conclusions they have reached about the UFO Phenomena over the years. Woven with Paola’s “word-for-word” interviews that include Steven Bassett, Dr. Michael Salla, Richard Hoagland, Grant Cameron, Larry Warren, Kathleen Marden, Jim Sparks, J.J. Hurtak, Clifford Stone, and Italian contactee Maurizio Cavallo. It is a fine work of contemporary UFO research. It is an excellent reference for students of Exopolitics, the study of the Extraterrestrial presence on Earth and its social and political implications for mankind.

Connecting the Dots… Making Sense of the UFO Phenomenon (2008)

Learn about Col. Philip Corso’s encounter with ETs. Hear from NASA about the objects that observe the space shuttle. See how the Vatican is preparing us for ET contact.

Eyes Only: The Story of Clifford Stone and UFO Crash Retrievals

“Sgt. Clifford Stone has a convincing claim of being on the inside of military operations involving the recovery of UFO craft and EBEs. He was an exemplary NCO and served his country in Vietnam. He has courageously spoken out publicly. He and his testimony deserve our attention and respect.” –Robert Salas

Born On The Edge of Ground Zero: Living in the Shadow of Area 51

Reme Baca and Jose Padilla lived in ground zero, near where the atomic bomb was detonated on May 16, 1945. They became part of our Governments Human Radiation Esxperiment. This is also where, thirty days later, in San Antonio’s own backyard, the recovery of an alien craft took place involving the Army-Air Corps in mid August of 1945, witnessed by Reme, Jose and Lt. Colonel William Brophy Sr. who was placed in charge of a space craft recovery on the Padilla Ranch in August of 1945 by his Commander.

Beyond the Heavens is an unearthly experience and a realization that we have human looking aliens quite like us living and working on Earth. It is their intention says Maurizio to raise the “ vibration” of this humanity, aid us in the coming Earth changes and most of all to offer us hope that we will find our true destiny in the stars. –Paola Leopizzi Harris

“Mass Contacts is an astounding story that says that Contact has begun from one who knows. A detailed report of contacts with human type aliens on the Adriatic coast, which answers many of our questions, this book is a milestone for ufologists who study Contact. They were here and many look like us! It’s time for disclosure.” –Paola Leopizzi Harris