“That is why the ancient traditions, even Christianity, say God is Love. There is symmetry here. The fundamental step where you get into this transcendent state is this feeling of ebullience, love and caring and unity.” — Dr. Edgar Mitchell

Ironically, this interview with Dr. Edgar Mitchell was done in Roswell, New Mexico. Dr. Mitchell is a personal friend, one of those wise men with unconventional wisdom because he surpasses the confining boundaries of scientific research when he discusses “Quantum Cosmology!” He is honest and wants the planet to progress on its evolutionary path and he does include that “paranormal phenomena” that Allen Hynek once told me not to overlook.

“I think I’ve reached the point that I‘m convinced enough of the reality of the ET presence and I’m not going to deny it and shy away from it… It is time to open this up to the public.”  —Astronaut Edgar Mitchell, Apollo 14

Mitchell: I lived here from when I was five until I went off to College. We had a family business in the valley. It was between Roswell and Artesia.

Paola: Friends talked you into coming to speak here at the UFO museum?

Mitchell: I resisted for a long time.

Paola: Did you resist because it was connected with the UFO phenomenon?

Mitchell: No. I think I’ve reached the point that I‘m convinced enough of the reality of the ET presence and I’m not going to deny it and shy away from it. I don’t get into it in detail. That is not my area.

Paola: I know that your area is more the metaphysical.

Mitchell: Well, I think it is an interaction there. Particularly since there does seem to be a non-local communication or mental tie here with some of these functions, whether they are real or not, I don’t know.

Paola: Can I ask you, why is it they pick you of all the astronauts? In the media you have been selected as one who represents the astronauts’ testimony as to this UFO reality, although you mentioned you never saw one in space. Gordon Cooper talks a lot more about it in his book Leap of Faith. So why you? Is it by talking about the metaphysical they have attached you to the weirdness factor?

Mitchell: I think it was the personal connection, since I had personal contacts in this area. I think it is my credibility as a scientist. I am very, very incredulous about what I see. I can’t throw caveats in. I don’t make blanket statements. Although my experience is not first hand experience, I have become a spokesman for my colleagues who did have first hand experience. I am very clear about all of these things and I am very clear about where our lack of knowledge is. What is the frontier? What are the unknowns? What are the parameters that we don’t understand? I think this gives me a lot of credibility.

Mitchell: We are dealing with a difficult process here. The main problem is that we, as an Earth civilization, have not come to understand ourselves; see ourselves in a cosmic sense at all. We are still very provincial. We fight over religion. In my opinion, fundamentalist Christians are just as bad as fundamentalist Islam and, at the very core, neither religion is like that. In the inner core of both of them, these religions talk about qualities like Love and Brotherhood.

Paola: You are saying that there are more similarities than differences?

Mitchell: Of course. It’s the cultural differences. It is not an intrinsic difference. It is like I said in my talk last night: “the transcendent experience is common to every culture in the world” and the transcendent experience is Brotherly Love, Nature, Harmony, the Unity, and cultures, in trying to define it, try to define an external deity as opposed to the process.

Paola: It is easier that way because you don’t have any responsibility. I guess a proverb could be: You can blame it on the devil or God. It is a lack of taking responsibility for who we are.

Mitchell: Well, that’s right, and our ignorance, and it is based on the egos we have. It is the unwillingness to go beyond ego. Transcendence gets you beyond ego. If you go beyond ego, you see all of this in a more decent perspective and you can start to put all pieces together. We haven’t done that yet. Not as a civilization.

Paola: That is why you think that contact is not likely until we get there. Right? Humanity as a species is not there. You mentioned in your talk yesterday, if they ask where you are from, you don’t say from Earth, you say from LA.

Paola: So do you think there has to be a one world, kind of, political situation?

Mitchell: Of course that is what has to happen.

Paola: People have some commonality. Right?

Mitchell: In due course, that’s what has got to happen. If we survive that long. We might wipe ourselves out before that. I don’t think it is a forgone conclusion that we are going to survive. That is where the philosophic, the whole notion of determinism and what the future is like, applies. We are creating the future. It is not determined. If we get our act together and solve our current problems, we could have a sustainable, abundant future. If we don’t, we could wipe ourselves out. We are on the verge of doing it with our current politics. It is regressive; going back the other way.

Paola: I need to ask you a personal question. Would you have liked to have contact with a cosmic culture?

Paola: This is very ironic because you are the chief astronaut spokesman for the ET presence and have never had contact. [That is] like me, who has been in this work for over 30 years now and has never seen a UFO.

Paola: Has it been lonely for you to have this vision and not many people to share it with, because the vision you have is kind of a “completion” vision; a kind of overall picture vision, and it is true that you are spending three quarters of your time trying to explain it to people.

Mitchell: I would not put it in those terms because I spend ninety per cent of my time trying to explain it to myself!

Paola: But you know that is truth for you. You are outspoken about that.

Mitchell: Well, I‘d like to discover Truth; when I can latch on to something that I think is true. Our knowledge base is incomplete and all we do is keep adding to our knowledge base. I think it laughable, frankly, that the Physics community comes up with a theory for everything. There isn’t one theory for everything. There is not one explanation. We may eventually have several theories that can tie things together nicely but there is not a single theory of everything.

Paola: Like the Big Bang being the main theory of creation – and what about Super String theory and others…?

Mitchell: Well, the Big Bang has gone away but as far as Super String that is suspicious for me. It all starts out with the notion of Big Bang, which starts out, if it were true, starts out with incredibly high temperatures. So they think [we] need to get these high temperatures for this broken symmetry; all this broken symmetry reunited, and we do not have enough energy in the whole galaxy to get to those temperatures, to prove their point. To me, that is the single flaw in Super String theory. Now there are a lot of good points but if it could hold together any better than the Big Bang theory I don’t know. I’m not a physicist.

Paola: You are not going in that direction. You are more into the awareness and what you can accomplish as a human. Is that right?

Mitchell: Yes. And I also think we are moving into a direction of quantum cosmology, as opposed to starting with “big bang” and trying to make quantum physics fit into it.

Mitchell: That originates from Quantum processes. That is, the quantum fluctuations within a zero-point field can start the process that builds the process, which builds into matter, an irreversible process. We have some evidence that suggests that. We don’t have a Big Bang but we have a lot of little pops! A continuous set of little pops!

Paola: That is a good metaphor. In your talk, one of the things you talked about is that the “intent” creates action. The intent creates our reality, which makes us who we are. If that is true, then that makes us powerful on a planet that has always been undermined by great powers trying to put down the masses. So, is the idea that “intent” creates, and we can create realities, and we can also create events?

Paola: In the past we have always given up our power to the power structures, so would you agree that it is very likely unpopular to the individual people and that it is hard for them to believe they have power?

Mitchell: You have to tie it with transcendence because, when you transcend the transcendent states, you get past the ego structure, and at that point you don’t need laws, you have “morality!” You have inborn, natural ethics because it is built on Love.

Paola: That seems to be the secret word.

Mitchell: Yes. That is why the ancient traditions, even Christianity, say God is Love. There is symmetry here. The fundamental step where you get into this transcendent state is this feeling of ebullience, love and caring and unity.

Paola: And you do not need laws.

Mitchell: That is the law! You learn to live in that. It is hard to live in that too when you are in this world, that is why the great mystics go to the mountains tops; to get away from the world, so they don’t have to deal with it – but it doesn’t help the world that much.”

I do admit that to effect change you need to submit to the “slings and arrows of outrageous fortune” and, especially for a woman researcher, it becomes a severe credibility issue. We all get discouraged at times but to have a conversation like this with Dr. Mitchell was a once-in-a-lifetime event. The metaphysical methodology he speaks about is the very “key” to unlocking the phenomena. This wisdom is that of many centuries of study. 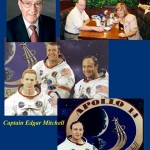 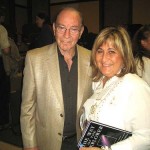 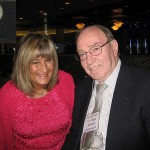 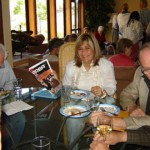 This entry was posted in Home Page, Interviews and tagged edgar mitchell, NASA. Bookmark the permalink.