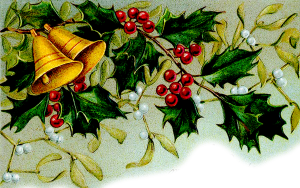 Monsignor Balducci used to leave his Christmas decorations up all year long so that I could enjoy them when I visited him at his home!

Monsignor Balducci is a dear friend who lived up the street from me as I lived next door to St. Peter’s in Rome. Often we would dine together. He was a great host. We would often spend New Year’s Eve together and he had the habit of leaving his Christmas decorations up all year. Often I would ask permission to bring over foreign researchers to meet him. We first bonded at the may 1999 conference in San Marino where I was translator for Dr. John Mack. 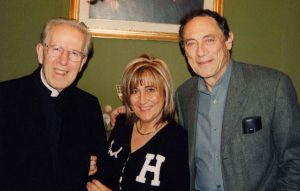 To me he was also very much like J. Allen Hynek in that he was often distracted by metaphysical concepts and would stray off into different tangents. He was a very random abstract thinker. One of the most heartwarming meetings I experienced was when I introduced Balducci to ex-priest Dr. Richard Boylan and they both communicated in Latin. Father Balducci had a captive audience as he cited many of the old church fathers, and although he did not agree with all of Dr. Boylan’s ideas, he listened carefully and pensively to what Boylan called his star visitor theology.

(from Wikipedia: Monsignor Corrado Balducci was a Roman Catholic theologian of the Vatican Curia, a close friend of the pope, a long-time exorcist for the Archdiocese of Rome, and a Prelate of the Congregation for the Evangelization of Peoples and the Society for the Propagation of the Faith.)

Monsignor Balducci has an incredible archive of news clippings on UFOs and the paranormal. It fascinates him. Unlike many of us researchers, he excluded nothing in the cosmic mystery and had begun “connecting the dots” long ago. It took me years to catch up to his thinking.

Paola Harris (PH): Is Ufology a relatively new study, and is it connected to parapsychology in your opinion?

Monsignor Corrado Balducci (CB): Over the last 150 years this phenomenon has appeared sequentially and with an increasing spreading and frequency rate. Spiritualism and Ufology are two types of manifestations. In the evolutionary scale, I believe there is something between us and the angels.

CB: Yes, of course. Jesus died for all beings in the cosmos. In the sacred Scriptures, He is called King of the Universe. Never underestimate the great mercy or compassion of God, whose grace and compassion surpasses all, and that means it relates to all of creation in all the cosmos That also means that “all is possible.” God created us to give praise to Him, as I imagine he created others to do the same. How can God be gloried without a varied creation?

PH: Why is it so important to take UFO sightings seriously?

CB: Because it is based on human testimony, as are our Gospels. Since a great deal of the Catholic faith is based on witness testimony, we must realize how important human testimony is. It would be a tragedy if we began to be suspicious of all people who report that they experienced something unusual like seeing crafts in the sky. From what I understand, there are some very credible witnesses who have seen this phenomenon and have come forward. They are courageous and should not be dismissed. Many church fathers have addressed the extraterrestrial presence in early philosophical works. In fact, testimony is a form of communication of our faith. Imagine what could happen to individual and social life if the value of human testimony were diminished, an act which would logically cause the decrease and disappearance of our faith, which is essential for daily life!

PH: Do you think that there is a type of theology or philosophy then that can be attributed to extraterrestrial life?

CB: I think that we need to examine it, then formulate “theological and Biblical considerations” on the habitability of other planets. First of all, there is a clarification: We should exclude that angels use spaceships, because they are merely spiritual beings. They are wherever they want to be, and in the rare cases when they show themselves, they have no difficulty in assuming a visible form. We can say the very same thing about dead people. The Holy Virgin, in the very few cases when she seems to contact humans (very exceptional episodes and to be confirmed in their authenticity), continues to choose other very different ways to transmit to us her maternal affection, her urgencies, her maternal claims or her sweet reproaches. We need to separate these realities.

PH: How do you reach these conclusions?

CB: My conclusions come from my research in parapsychology and demonology. There are human testimonies concerning the UFO phenomenon—in particular the abduction phenomenon—which are essential to historical truth and must be considered seriously. These things cannot be attributed to the “Devil.” He does not need UFOs. Even keeping their angelic nature, we shouldn’t think about the devils at all, because they are connected in their liberty to God in their extraordinary activity, and in that way they are unable to express their terrible and malefic hate for us. Let’s remember St. August: “If the Devil by his own initiative could do anything, even a single living being would not stay on Earth.”Let’s remember also St. Buenaventura: “Is so large the demon’s cruelty, that he would swallow us in every moment, if Divine protection doesn’t guard us.” This has nothing to do with the Devil. These important UFO sightings by credible people must be taken into account because there are so many witnesses. It is as important as scientific research is! If we live in constant skepticism, we will destroy society and our dignity as human beings. We will believe no one. Catholicism, which is partially based on human testimony—primarily letters of followers of Jesus (Apologists), who explained the religious phenomena of Jesus and the resurrection and presented a certain truth. The church has based many of its doctrines on this human testimony. Likewise in Ufology, we know a phenomenon exists, and although we don’t know who these aliens (possibly angels) are, it is possible that they are more evolved than Man is today.

PH: Can you quote some church fathers who suggest the existence of life on other planets”? I heard that Padre Pio said something of this nature. CB: Yes there are several. Don Andrea Beltrami (1870-1897), the Salesian Father and servant of God, prayed also for the possible inhabitants of other planets. Of the 16 booklets he wrote, one seems to deal with this topic. The second is the recently sanctified Padre Pio, who was beatified by Pope John Paul II on May 2, 1999, and canonized on June 16, 2002. He was asked the following question: “Father, some claim that there are creatures of God on other planets, too.” Padre Pio replied, “What else? Do you think they don’t exist, and that God’s omnipotence is limited to this small planet Earth? What else? Do you think there are no other beings who love the Lord?” Another time someone asked him, “Father Pio, I think the Earth is nothing, compared to other planets and stars.” His answer: “Exactly! Yes, and we Earthlings are nothing, too. The Lord certainly did not limit His glory to this small Earth. On other planets other beings exist who did not sin and fall as we did.”

PH: So you are saying that believing that UFOs exist is not contrary to one’s faith or Catholic Church doctrine?

PH: Is it a grave mistake to think that you are the official voice of the Vatican?

CB: These ideas are mine, and I do not represent the Vatican. However, I am told that the Holy Father Pope John Paul II is has seen me on Italian TV several times and follows my radio homilies. If there were some objection, I’m sure I would know. I believe there to be no problem here. PH: Thank you, Monsignor Balducci, for your kindness to me and all your foreign guests.

CB: Compliments and good wishes on your interesting work.