Ingo Swann – The Parapsychological Connection to The UFO Phenomenon.

This is from a chapter in Paola’s book, Connecting the Dots, about Ingo Swann:

The Psychic Connection: Getting the Chills!

The Parapsychological Connection to The UFO Phenomenon.

Most of my work deals with “nuts and bolts” interviews on the UFO Phenomenon so to completely veer off in this “paranormal” arena is highly unusual for me. It occurs to me now, that on some inter-dimensional level I am being led there as I am being led to” the truth. All of us can access this information.” It is a matter of quieting our minds, eliminating artificial stimulation, whether drugs or TV, not contaminating our bodies with what we put in them and simply “looking up” instead of looking down.

A special thanks to Israeli psychic Uri Geller and Belgium Psychic Pascal Riolo, who led me to the stories “The Psychic Connection and the Psychic Conclusion ” which demonstrates the strangeness of “being in Sync” or of  “being tuned in” . It is insane and ignorant to explain everything that has strange timing or is synchronistic as just a “Coincidence”

Time is a mystery which is thoughtfully discussed and explored by all those interviewed in this section Strange timing and strange Cosmic messages gives all of us what too many are now calling “the Chills.”

In his book Penetration which is rare to find these days, the truly amazing psychic and artist Ingo Swann goes into detail about this and insinuates that we were told to stay away because we were invasive to these entities. I caught him as he was going out into the garden alone and I did not want to either disturb or invade his privacy. I just asked him to sign my copy of Secrets of Power and thanked him for coming out of his seclusion for this event.

Today Ingo Swann basically gives clear messages.” keep the power in your own hands, “access your inner “ESP hard Drive”, Realize all is not what it seems, and  we are living in illusion . He sees humanity as “energy-life-conscious-entities usually set in our own local environments’.  ( p. 115 , Secrets of Power). He is very clear and open that “societal conditioning flattens knowledge of individual will dynamism in favor of subservience to societal power artifices. ( p .162 ) Secrets of  Power). About UFOs, Aliens? In his book Penetration, Ingo describes being asked to remote view the alien presence, being taken to a possible landing sight under cover and finally identifying an alien while in California. He alluded strongly to the fact that the government knows something about this. 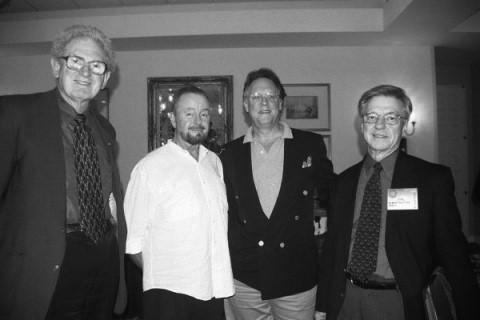 On June 14th-16th 2002, I attended the 30th year reunion of the original SRI (Stanford Research Institute) Research Team with Government Remote Viewer Ingo Swann (biomindsuperpowers.com), physicists Hal Putoff and Russell Targ  and Archeological remote viewer Stephan Schwartz in Austin Texas. It was only at this reunion that I actually met Paul Smith whose interview I did in this section, in 1999. Then I did not understand what this technique does or how it works or who the players are.

In essence, Remote Viewing has to do with the developing of our Psychic ability  and viewing a Target in the past and possibly the future. It can be mastered by all and though visible demonstrations, that I personally saw, it can also be taught. Like most of modern technological advancements, its original purposes were for Military Intelligence community as explained in detail in the Paul Smith interview.

The timeliness of publishing both the Courtney Brown and Paul Smith interviews only comes because I now understand exactly what they are talking  about after having been catapulted into this arena by Uri Geller. Geller insists that we all possess this ability and he is right. I watched intensely as ex -government Remote Viewer Lyn Buchanan taught people how to bend forks, spoons and several metals at the Psychokensis(PK) party Friday at the conference in Austin just by concentrating and shouting “BEND”!

Although I did not try it, I saw at least fifty people do it over and over again. Under this organized and controlled environment, there were, what most people would have labeled as, “strange goings on” but the skills were considered very normal. Metal bending is a skill that all can learn with discipline and persistence and the right technique.    In the outside world however, it is still strange as I overheard the young people at the main desk of the Austin Doubletree Inn talk about the strange spoon benders in the ballroom the night before. This demonstrates perfectly the duality of this phenomenon, quite normal but considered ‘high strangeness”. It was Ingo Swann who leaned over to me in the garden where we were sitting with several people and explained “we all have this ESP program in in all our hard drives, but society does not encourage us to use it. It simply takes training and discipline and persistence. His procedures, those he first developed with CIA and NASA funding are delineated in a book called Secrets of Power vol. I and III , Ingo Swann Books

Of course neither our society nor our governments, nor our institutions would encourage us to use these potential talents because, besides being a potentially invasive technique, with possible “mind control” components, it would allow for these powers to access information that, if misused, could possibly be subversive, as well as manipulative. It might also mean an” end to lying”!

At the IRVA conference, stance was to keep a low profile and observe as this very operational method of Remote viewing ‘a target ‘was demonstrated over and over again. It was an honor observing the pioneers SRI’s Swann, Targ and Putoff mix with the people and explain their history of the Remote viewing research in the ‘70s.  Especially, Russell Targ with his sense of humor said the decision to fund the SRI studies came after Werner Von Braun told NASA and the Government, to” give these guys some money ‘….. because he had a psychic grandmother.’ ”

That is the basis on which many government decisions are often made, a psychic grandmother “quipped Russell Targ. Amazingly his speech detailed his personal growth through the scientific study of ESP to a sort of metaphysical and mystical conclusion of the love and inter-relatedness principle of a totally connected universe. He was watched over by a fatherly Ingo Swann who was afraid that Russell would fall off the podium because of his vision problems. Targ, Swann and finally Hal Putoff, the consummate soft-spoken scientist who knows more than he lets on, forged the way for all this back in 1973. But knowing me, one might ask ‘Did they mention UFOS? No!  I did! I asked the amazing Ingo Swann the following question:

“Ingo, Is it true that in your spellbinder Penetration, you remote viewed non-human intelligence on the dark side of the moon? His answer to me “also on the light side!”

It’s a miracle that this type of convention could take place in 2002  giving scientific credibility to a skill that a few decades ago was shoved into the area of the occult and witchcraft. With the dawning of the NEW AGE and self healing movements, it is now categorized positively as part of our “human potential” and classes are being offered, although yet a bit expensive. The teachers are the same practitioners that were invited by the military to use them for intelligence gathering. My informative interview with Paul Smith explains the personal advantages of learning these techniques to enhance our everyday lives. But it was Courtney Brown who cautions that the government says that this “must” not enter into the mainstream nor must “big money” fund it otherwise it becomes dangerous.

In conclusion, one thing is for sure, I have shifted my thinking to believe that ESP and these Parapsychological events are truly of interest to the military community, science and scientists but for a far better reason than that someone “had a psychic grandmother” as in the case of Werner Van Braun, and I have a gut, intuitive and psychic feeling that someone, if not big money, is researching this as well as funding it and ‘Yes, it is science!’ It does not take a genius to realize if we are dealing with telepathic inter-dimensional Extraterrestrial beings, we had better know how to communicate with them!’

This entry was posted in Interviews, Latest News. Bookmark the permalink.